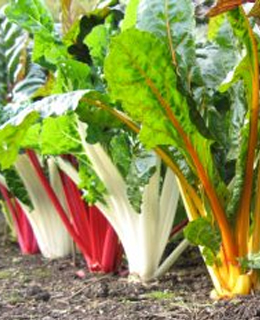 Swiss Chard is one of the leading cooking greens served at the finest restaurants. We know why… it’s amazing!

Fordhook Giant: The bright green tall stalks of this chard will stand at attention in your kitchen.Ruby Red: The favorite green of the wicked witch of the East. She had such a fondness for swiss chard that she boiled up a cauldron of this strain and dropped in her red shoes. After an extensive swing on the vaudeville circuit as a showgirl, she was forced to retire because of bad ankles. Later in life, she moonlighted in a small hamlet near Oz until her unfortunate showdown with a Kansas house