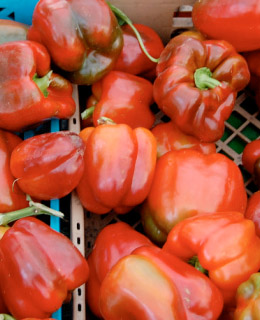 The crew at the farm loves the hot pepper crop we plant each year, as well as the sweet bell peppers.  Lots of variety for the pepper aficionados at the markets…

Ancho Gigantea: This standard Mexican variety has two colors-one for before it is cooked and one for after. Used to run with an infamous early 20th century Mexican villain, but had to drop the first letter of his name because the leader of the gang couldn’t stomach anyone else having his surname.

Aurora: A beautiful ornamental pepper mix that is sure to amaze and astound even the most jaded gardener. Some say it’s not from this world. You be the judge.

Bulgarian Carrot: The Eastern Bloc weightlifting champion has endured years of suspicion due to his unusual yellowish appearance. He categorically denies any steroid usage and frankly, we believe him.

Buran: What? We don’t even know how to say this variety, but we do know that this Polish-born exile has endeared himself to the soil of Waldingfield Farm. This one is so sweet that we have to keep the nieces and nephews from overdosing.

Fatali: Probably the hottest pepper we grow here at Waldingfield Farm. Painters use it as a thinner, and people have been known to use it as a substitute for petrol. We caution the general public.

Cyklon: An astonishingly pink pepper that has been an All-Waldingfield performer in years past. A long stay on the disabled list has many wondering if Cyklon has what it takes to resurface as a leader in the community. We think he still has the heat.

Habanero: Of Caribbean descent, this pepper is too hot. We don’t even know why we sell it. Scalding. You have to be pure Aztec to eat this #$@!#$.

Fish: An African-American heirloom that has traditional southern roots. We never have had a seed variety with and animal name.

Georgia Flame: Gorgeous Russian heirloom hand-delivered to Waldingfield by Stalin himself. His stay, however, was very brief as we kicked the known megalomaniac back to his frozen tundra, where he wallowed his final days away cursing the leaders of Litchfield county’s finest organic farm.

Islander: O island in the sun, come to me with all your fun….showy sunset colors that are sure to delight.

Labrador: Nice yellow bell pepper with ties to the Canadian mob. You will definitely like these beauties.

X3R Red Knight: Double secret agent for the USDA, knight is new to the scene at Waldingfield. He will be watched, believe me, as would anyone whose name sounds like a nuclear missile and could be a possible communist. Our calls to Joe McCarthy’s office have gone un-returned.