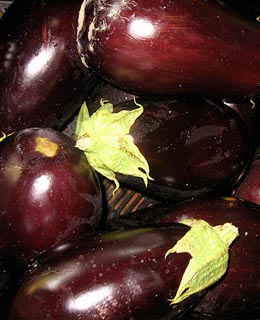 The eggplant remains a favorite of Felix and Fanny (farm security).  They make a mean Babaganoush!

Applegreen: Cute strain of eggplant that is sure to be winner here at Waldingfield Farm. Introduced in the 1960s, this oval-shaped pale green skinned garden hero has been succeeding every year in getting people to try eggplant again- for the first time.

Black Bell: Black is beautiful. Dynamic fruits lend a wonderful addition to the late summer/fall harvest, and has also been an All-Waldingfield performer three out of her four years on the fields of Waldingfield.

Casper: Our local friendly ghost at Waldingfield Farm. Not traditionally on many menus herein America, Casper is trying to ingratiate himself into the hearts and minds of the general public.

Elondo: This young Italian arrives at Waldingfield with a tremendous reputation as a dead pull hitter. Can he hit the curve and the major league junk? We will let you know.

Neon: Purple headed lead bassist for the punk-rock band The Sex Pistols, Neon had a falling out with Sid Vicious before his tragic end and found refuge in the hallowed halls of the Waldingfield Farm deluxe barn/concert hall, where he is encouraged to play as long and loud as he wants.

Rosita: This Puerto-Rican bombshell came to us after we rescued her from Guantanamo where she had been held on trumped-up espionage charges. You would have a problem as well if your government were exploding dangerous test bombs near you and your family, right?

Thai green: No, this is not a new strain of sinsemilla. On the contrary, this prolific variety offers beautiful, long slender fruits that don’t require peeling. He has experienced little difficulty in gaining a foothold in the Waldingfield Farm garden planner for this summer.

Udumalapet: An early All-Waldingfield 2004 selection. We are positive that you will jump up and down with unbridled ecstasy upon seeing and then eating this extremely colorful yellowish-purple variety. Hey, can you say it three times fast?