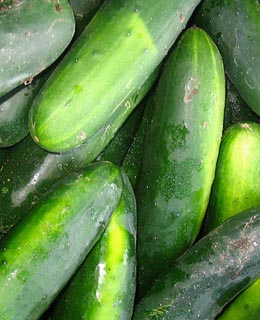 Always a strong crop for us, the cucumber is a true all star during the summer and early fall months.

True Lemon: A tremendous star on the late 19th century American baseball scene, Ol’ True serves it up with the best of ‘em. He goes down smooth and is easy to digest, like a fine sippin’ whiskey.

White Wonder: Century old whitish cucumber. Although wickedly popular with the general public, “Whitey” has had to endure harsh hazing rituals by the other cucumbers, no doubt envious of his appearance. We at the Farm quickly stepped in and traded the clubhouse troublemakers, and encouraged “Whitey” to express himself and live his life his way. We know you will like him, too.

Mexican Sour gherkin: Precious old heirloom variety that fought his way out of the Alamo disaster and disappeared from mainstream America for much of the last century. One might think that a veteran of the Alamo might not have anything left in him, being that he’d be 180 years old, but the reinvigorating streams of Waldingfield Farm have put a new lease on this old farmhand. Very similar to a small watermelon in appearance.

Garlic - standing up and standing tall in early sp

Took advantage of some beautiful weather these las

Here we are - smack dab in the middle of National

Digging out and digging in - winter project season

Flashing back to early summer on this wet and drea

Happy New Year! Together, let's make it a good one

Sooo...heard some spooky noises coming from the be

Took advantage of the sunshine earlier this week t

A little a.m. hand-weed action in the rainbow char