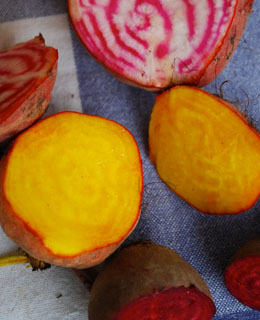 Beets are one crop we will be focusing on more carefully in 2012.  some swear they have healing powers. Who knew?

Bulls Blood: The juice from this beet is used to make the only red food coloring by Swedish law. That really is true. Would you also believe that we use it to stain our big red barns of Waldingfield? Whatever the case may be, we love this delicious and tasty beet of yesteryear.

Burpees Golden Beet: Chefs clamor for this elusive golden colored beet. Not a bleeder like many of his distant cousins, this beet should rise to the top of the Waldingfield most-wanted list. Big sellers at farmers markets.

Chiogga: Ah, the elusive candy striped beet. Very hard to get this particular seed, so we hold our collective breaths every spring and hope that we can secure its place on the Waldingfield roster.

Detroit Dark Red: Oh baby. We had to think long and hard about allowing this former gang leader on the property. Big and globe-shaped, Detroit (DD to his close friends) assured us that his banging days were behind him and that he was determined to be a team player. Under close supervision and curfew, DD will prove us all wrong and finally institute a renewed faith in the powers of rehabilitation.

Golden: Cortes and his conquistador cronies were searching for the elusive “golden” during their treks throughout the great southwest. The prize, however, proved to be too elusive for them and they skulked back all the way to Madrid, where they were forced to endure the ridicule of the royal court. A great beet.

Early Wonder Tall Tops: Do you like beets? Do you? Well, get ready for these deep burgundy baseball-sized beets that are sure to tantalize your palate and send you into euphoric spasms. Well, maybe not.