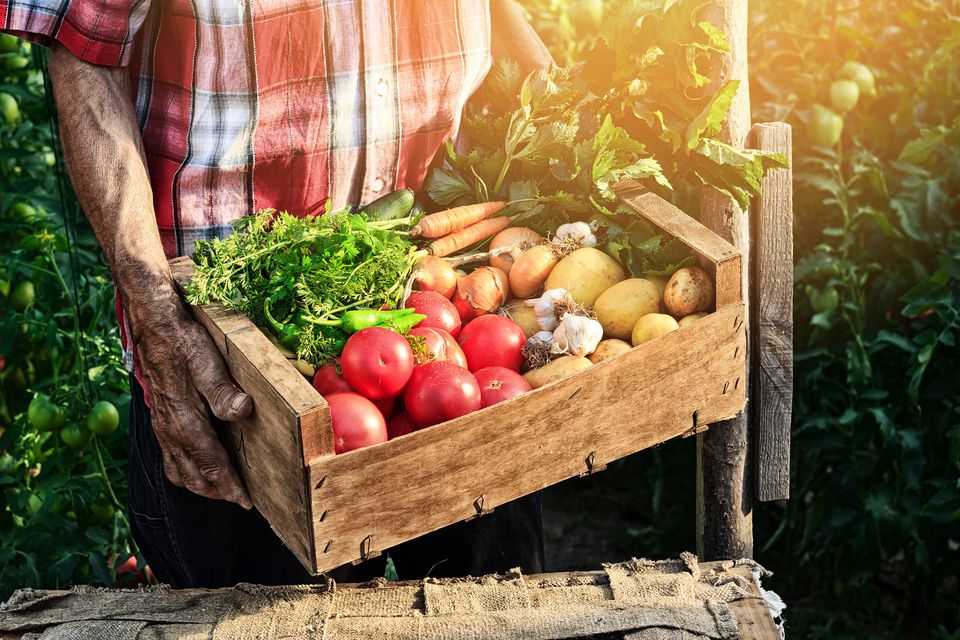 In 1990 our brother Dan started a small organic farm in Washington, CT.  The first things he did were buy a dog; a Redbone Coonhound named Otis, and he start a CSA.  The plan was to engage with a group of friends and neighbors, get them to pony up some loot, grow their garden vegetables for them, and create an early revenue source for the farm in the springtime before a seed had been planted. He had 15 members that first season.  Oh yeah, he had never run a farm before, and the new members were a little wary as to how it was all going to work out.   What farming knowledge Dan had he got from reading and working a season on a small organic farm in Cornwall a few summers earlier.  He also began asking some other farmers in Litchfield County about ways to “make a go of it” at farming, and the concept of CSA farming kept coming up. From the earliest days of our farm, it was seen as the wave of the future for small-scale organic farms. It was the beginning of a model that continues to this day though the scale has changed a bit.

So what is a CSA?  It stands for Community Supported Agriculture.  The idea is that people invest, share the risk, and reap the rewards of their local farms production throughout a single season.  While it is most commonly associated with vegetable producers, it is now actively part of the dairy, chicken, beef, pork, and seafood worlds, as well. It has its origins depending on who one asks in either post war (WWII) Japan where a group of women created a subscription system with local farms who refrained from using synthetic inputs, or from Europe where followers of Austrian philosopher Rudolph Steiner’s writings were engaged in biodynamic farming and began to collectively support farms who shared similar methods.  The latter appears to be more closely linked with the rise of CSA farms in the US.  It started to trickle into the US consciousness in the late 1970’s and two farms in the Northeast, Indian Line Farm in Massachusetts, and Temple Wilton Community Farm in New Hampshire, lay claim to being the first two in the US.  This was in 1986.  A movement was born.

At Waldingfield Farm we like to explain to people interested in joining our CSA that membership is a 52 week investment for a 20 to 25 week return, and that we will faithfully adhere to our standards to ensure a harvest.  Should nature intervene (Tomato blight in 2009 took all 30,000 of our tomato plants) then that burden is shared by all of us.  Programs vary in length but usually run between 16 to 25 weeks.  Once farmers have the funds needed to successfully start their seasons (seed orders, early season labor costs, machinery upkeep, etc) they can focus on growing instead of marketing because their investors have backed them.  At its core the development of a “community” is what drives many of us to have the program.  It is exciting to be a part of a group, to exchange weekly doses of farm knowledge and in return hear of lovely dishes prepared with food one grew, or find out that someone had never cooked with Bok Choy before coming to our CSA.  The best CSA programs often have the most engaged client base, though it is not exclusively so.  Over the years our CSA has varied in size, and our farm model also incorporates markets and wholesale distribution. Some clients keep coming back with very little input other then a pre season payment and regular pick ups.  Others become part of the fabric of our farm.  Come to think of it, CSAs are really what we know today as “crowd funding”.  Pretty cool.

So why do CSA farms matter, and are they worth the investment of your hard earned money up front?  After all, we are used to paying for food we pick out at supermarkets or at a farmers market on the spot.  We see it, we buy it.  But is it worth it to pay well ahead of actually getting anything in return?  We think so but admittedly, not all farmers have been able to deliver the goods, and some people can be never be satisfied with what the farm delivers. It might actually be helpful to also look at the CSA model from both the farmer’s vantage point as well as from the investors.  Sometimes the expectations of a CSA can be very different and explanations are needed.

Most people who join a CSA do so with the noblest of intentions.  They want to support a local farm and allow their family to keep in touch with where their food (mostly) comes from.   Or their friends did it, raved about how awesome it was and they wanted in on the action.  Others join because they believe that market does not represent the needs of producers and the true costs of production so why not invest in the farmer and allow them to pocket what middlemen have been taking for years.  Still, others believe that by joining a CSA you are joining a price club akin to joining Costco (you’re not), though in our experience after 26 seasons of CSA production, most growers are usually pretty good at the “value” factor and reward clients when bumper crops come in.   What all will agree on is that the food is (usually) far fresher then anything available at the supermarket.

In the beginning, farms like ours (Waldingfield Farm, in Washington, CT), and others who were early pioneers of the CSA model, were usually certified organic growers who had to actually seek out like minded believers in chemical free farming methods and the CSA model was a lot better then what most “health” food stores provided.  The type of organic produce we have today wasn’t really available at local supermarkets back in the late 80’s, and the boom in farmers markets was still a few years away.  Today CSA farms are seemingly everywhere, and that is a great value to the consumer.  There are a lot of farms to choose from.  While is has been a major factor is the growth of smaller scaled organic farming here in Connecticut, some of the larger conventional producers saw a movement formulate right under their noses and they, too, have sought a piece of the “local” CSA pie.  They are certainly welcome, however their price points often are cheaper than their organic counterparts, and have caused some to question whether or not an organic CSA is the way to go.

Since it is locally produced, what’s the difference?  How come they can produce so much more?  These are fair questions, but often they are born out of a complete lack of knowledge as to just how varied the farming practices are.  It is a lot more then labor standards, or using synthetic versus plant based herbicides, pesticides and fungicides, or planting GMO or non GMO seed stock, not to mention the tough regulatory standards for certified organic growers versus the completely unchecked conventional producers.  That is only the beginning.  But competition should not scare organic CSA farm producers.  Instead it should inspire one to tighten their practices, get more focused in their marketing and story telling, as well as fight for their market share.  Farming is a business, after all, and while we are on the subject, conventional producers are fighting for their share of the pie just as hard if not harder to compete with the far cheaper conventional fare in the supermarket from all over the world.

Bottom line is people should join CSAs if they want to really connect with their food source, if they wish to experience risk and reward in a non monetary but nutritiously satisfying way.  They need to ensure that they have the time to make that trip the farm stand or to a drop spot (logistics have to work), but for many that trip is a highlight of their week.   For the farmer a CSA has many upsides (besides easing early season financial burdens), but it can also mean having to deal with an investor who feels the need to critique on every single item they get in their weekly basket, or complain they got no tomatoes in June nor Strawberry’s in October.  It can be tough to have to justify a lost crop due to weather, insect or decease when a CSA member was counting on it.  Having to explain risk and potential loss to some CSA members is something many producers do not revel in doing, but it is a part of the game.  And not all growers are adept at growing the rich variety of goods that are features of the successful CSA model, and as such concentrate on a wholesale model, or limit themselves to farmers markets as their primary revenue source.  There is room for all.

So get out in the mix, check out that local farm down the road you have been meaning to stop in and visit.  Chances are they will have a CSA, or maybe not.  Maybe you will their first member…

Patrick Horan runs Waldingfield Farm with his brothers, Quincy and Daniel.  The farm has been Certified Organic (Baystate Organic Certifiers) since 1990.  He sits on the Board of Directors of CT-NOFA.  He and his wife divide their time between Brooklyn, NY, and the farm.  He is a Mets fan.